Why do programmers press Ctrl+S so many times for saving once??

So let me take the pain to explain on behalf of the coders:

You see, most of us has faced this at least once. We pressed ctrl+S to save, but the S or the ctrl button was not sufficiently pressed. Hence the changes to the code wasn’t saved at all. Eventually it would give the same run time error that it was giving few minutes back because a stupid ‘S’ didn’t press, and trust me it is frustrating at times(specially when some one is sitting beside you and looking at the screen in a judgmental manner).

Why normal people don’t face this?

Well normal people don’t have to execute a file while making changes to it. Let me explain:

If you leave your changes unsaved in Word and try to close it, it would remind you about the unsaved changes.

But, if you execute your code without saving the file, the compiler/interpreter won’t give a sh*t about your feelings, it won’t care if you saved it or not, it will simply run the same old version of the file and give some error all again.

These things are inappropriate and one of the many reasons why some programmers may wanna act like Hulk at times!

Gradually one starts taking extra precautions and pressing the ctrl+S again and again before running the code again.

And soon it becomes a habit and everything comes down to this: 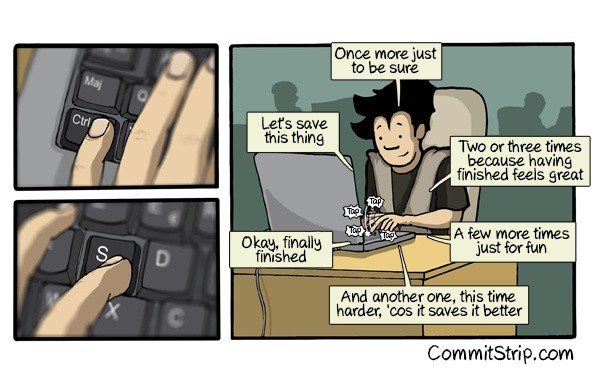 Take an avid reader, implement the concepts of programming and git init the repository of software engineering. Merge the branches of application development, data science and data modelling to the master. Now push the commits related to product management and project architecture. Pour some love for comics. Finally sprinkle the entrepreneurial and intrapreneurial snippets with some ambitions and attitude. Bake for 20 minutes. Then take another 15 minutes to prepare some espresso with enough steamed milk and milk foam. The resultant delicious and extravagant cake along with superb latte is what you would know as Utkarsh Kaushik! Read more about me @ utkarsh-kaushik.com
Previous Blockchain – The Next BIG THING
Next Blockchain Use Cases